This look is from the scene where Johanna gets a bit risque! I've been told a few times that I remind people of Johanna Mason, and I hope that's true, because Jena Malone is absolutely gorgeous. It was incredibly hard to find a decent photo on the internet, other than gifs from Tumblr. However, I did manage to get a few decent shots to help me create this look. 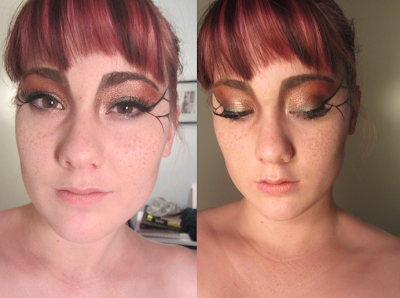 This look was so fun to create! I primarily used the Too Faced Shadow Insurance Policy Collection. This look is all about her crazy art liner and her brows. Johanna is from District 7, lumber, which is obviously what inspired this look. 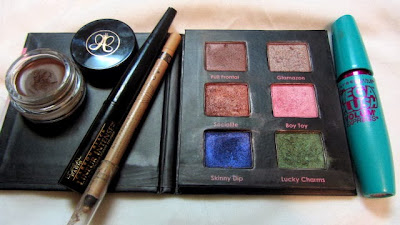 To start, I used my Too Face Shadow Insurance Primer (not photographed) all over my lid, up to the brows. Then, I started work on my brows. Using a synthetic angled brush and my new Anastasia DipBrow Pomade in "Dark Brown," I very intensely filled in my brows. Naturally, my brows don't go in very far, so I extended the inner parts of my brows till they met the sides of my nose. I took the same angled brush and began to line the sides of my nose, stopping near the inner corner. From here, I blended the product inward, keeping the intensity near the brows. This contouring is what created the drama in Johanna's look. 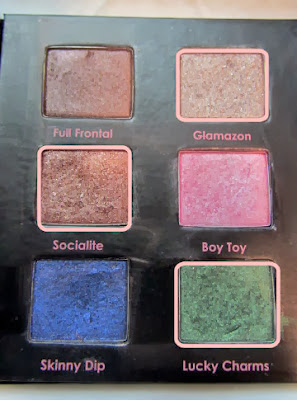 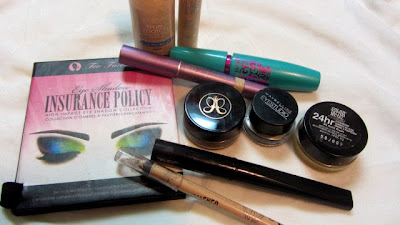 From here, I had a choice. I could either do my face makeup and risk messing it up while doing the liner, or do my liner and risk messing it up when I did the face makeup. I felt that the face makeup would be easier to fix, so I applied my foundation with a flat foundation brush. I used the flat foundation brush today because I wanted to make sure to create a nice crisp highlight on the bridge of my nose. I concealed any blemishes or redness using my Urban Decay 24/7 Concealer Pencil, which I also used on the bridge of my nose for even more coverage. Then, I set it all with my Revlon Photo Ready Translucent Finisher, and contoured with my Inglot 358 Matte shadow. 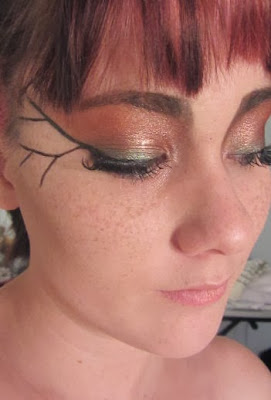 From here, it was time to tackle the liner. First, I used my Maybelline Eye Studio Lasting Drama Gel Eyeliner on a precision artist's brush to create the line on my upper lash line. I also used to it map out my "branches." I began my branches the way I would any other winged liner, only for this look, I brought it all the way up past my brows, and into my hairline. Then, I took my L'Oreal Carbon Black Lineur Intense and traced over the line, using short strokes. The key to creating the branches is short strokes, because you will drive yourself absolutely mad otherwise. Trust me, I tried. I used the photo of Jena Malone on the right to help find the right design of the branches, and I noticed that they followed the contours of her temple.

Finally, the lashes. I honestly am not sure which lashes I used for this look, because they were in an older container with no label. However, I think they may have been the Ardell Fashion Lashes 102 Black, which I trimmed to create more of an accent lash. Johanna does not seem to be wearing heavy lashes on the inner corners, but they get thick and voluptuous on the outer corners. Any kind of accent lashes would be great for this look. I then used my lash curler to fuse the lashes with my natural lashes, and my Maybelline The Mega Plush Volum' Express Mascara on the inner corners and lower lashes, to keep them well-blended and naturally dramatic.

As for her lips, they look very natural, with a slight gold sheen. So I applied a lip balm, and dabbed Maybelline Eye Studio Color Tattoo Metal cream shadow in "Gold Rush" all over my lips, and I was done! 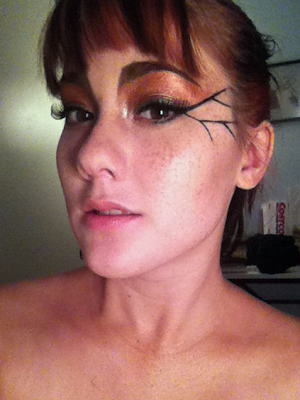