This is going to be a very long-winded post, as well as a post I've debated on typing for a very long time. But about a week ago, Andrew and I signed up for the Team NPF Walk in Orange County this June, and I decided it was time to talk about my battle with psoriasis. I'll also be included a few throwback photos during the time periods of my life that I'll be talking about to avoid such a huge wall of pictureless text!

If you don't know what psoriasis is, it's an autoimmune disorder that causes flaky, raised, red and silver patches on the skin. MayoClinic defines psoriasis as "a common skin condition that changes the life cycle of skin cells. Psoriasis causes cells to build up rapidly on the surface of the skin. The extra skin cells form thick, silvery scales and itchy, dry, red patches that are sometimes painful.
Psoriasis is a persistent, long-lasting (chronic) disease. There may be times when your psoriasis symptoms get better alternating with times your psoriasis worsens."

The general consensus of psoriasis is that it is caused when your T cells (a type of white blood cell) begin to attack healthy tissue, as if they've mistaken the healthy tissue for damaged tissue. If you've ever seen or heard the musical RENT, you'll probably have noticed they talk about T cells a lot (more specifically, in the song "Life Support"). That is because, people with AIDS have depleted T cells, which is why it is so dangerous for them to get sick. A bit of a tangent, but it's kind of just an example of why T cells are so important. Yes, it sucks that my T cells have begun attacking my healthy tissue, but a person needs them to survive.

Anyway, when my T cells attack healthy tissue, my immune system responds as it normally would by swelling in the affected area. Because the T cells are attacking the healthy tissue, the healthy skin cells, T cells, and other white blood cells begin to reproduce rapidly, which creates the patches of skin, or "plaques," that you typically see on a person with psoriasis. Essentially, my skin cells turn over too quickly and it causes a back up that results in skin plaques in the affected area. I know, it's a little hard to understand and explain, but I really think that MayoClinic has done an amazing job of explaining it.

Oh yeah, and not only does psoriasis have a physical effect on the body, but also a psychological. In fact, people with psoriasis are twice as likely to develop depression than those without.

So when I was young, maybe around 6 or 7 I had my very first outbreak of psoriasis. Of course, at the time, we didn't know it was psoriasis. It developed all over my scalp, and was incredibly itchy and irritated. It bled a lot, and because I was so young, I really struggled to understand that I shouldn't be scratching and picking at it. My mom applied a steroid cream to the plaques and after a few months of topical treatment, they healed up.

Here's a photo of me around the age it happened. Yep, that's me in the cow costume, getting ready for my school's Christmas play. 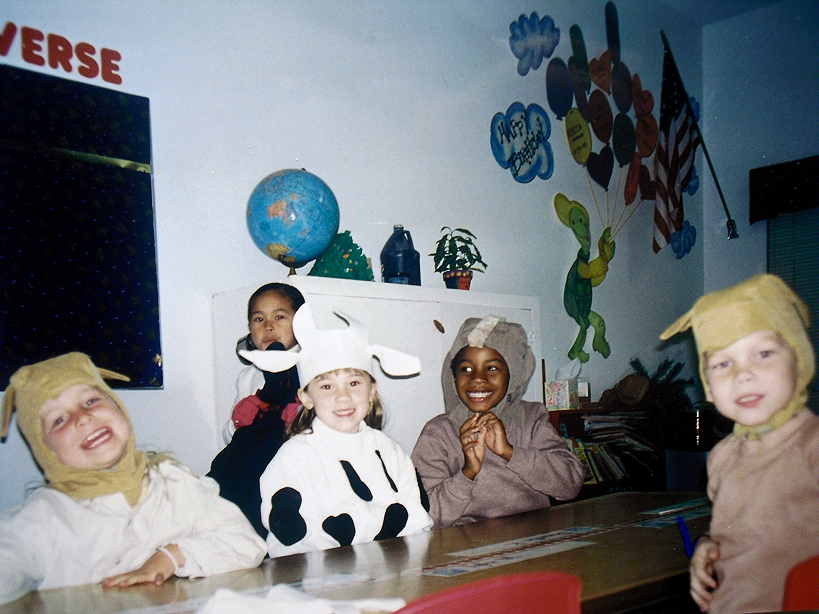 I thought that would be the last of it, but when I was 17, I developed plaques on my scalp again, this time around my hairline. I figured it was just dry skin, or eczema, so I applied lotion to it consistently and hoped it would go away. When it didn't, I thought maybe it was ringworm or something. Gross, yeah, but I couldn't think of what else it would be. My mom, who's a nurse, brought me an antifungal cream from the pharmacy and I used that for about a month. Absolutely nothing happened. I kind of just shrugged it off and started using the same steroid cream I used when I was a kid, and again, it went away.

Fast forward just a couple of months, to when I was in beauty school. when suddenly, I noticed it coming back. This time, I also began to see it on the inner elbow area, behind my ears, as well as around the bikini line. Finally, I decided to do some extensive research, and found photos of psoriasis online. It looked exactly like the condition I had. I figured I would just keep using the steroid cream and be really careful about the products I used, and hopefully it would get better. I think the worst part, though, was that my friends in school were too scared to touch my hair because they "didn't want to hurt me" even when I said they wouldn't.

Here's a couple of pictures of me with some of my best friends during the early development of my psoriasis (featuring Ciarlene with her long hair, my sassy face, and the best hair of my life):

In the above photo, you can actually kind of see a weird random patch of skin in my bangs that embarrassingly enough almost looks like a bald spot. That was actually a cowlick caused by my psoriasis that I had never had until around that time! Seriously though, my hair looked so good during this time of my life.

Anyways! I left beauty school in August of that year, and finally, after months of dealing with the itchy scales on my skin, I decided to go to the doctor and get something done about it. It was also around this time that I met Andrew (cue photo from early in our relationship). At this point, my doctor prescribed me a topical oil. It worked alright at first, but I noticed after about a month or two of using it, it stopped being effective. So I went back to the doctor, and she recommended me to a dermatologist. 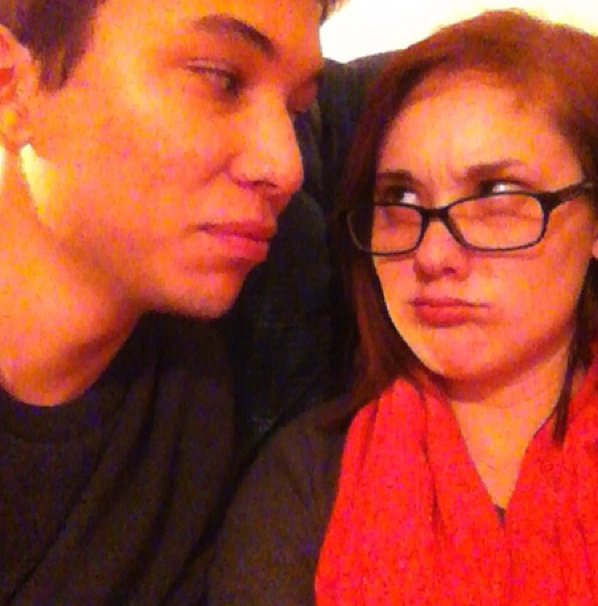 When I went to the dermatologist and told him I believed it was plaque psoriasis, he took one look at it and said "Yep, that's exactly what it looks like." He took a sample of it (gross) and prescribed me some other kind of topical medicine. Like the oil that my doctor prescribed, it worked for a little while, and then stopped after a month or two. That's when I decided to take things into my own hands and start looking for some homeopathic remedies. From hemp seed oil, to apple cider vinegar, to just a whole lot of itching and crying, I tried pretty much every remedy I could find on the internet. Hemp seed oil worked really well to soften my skin, which made it less irritated and swollen, but it didn't help entirely. However, I found that that was probably better than any of the medicine I was prescribed by doctors.

While I was living at home, I did oil treatments on the affected areas usually once a week or so. It worked, and, while tedious, it helped the symptoms. Then, just a few months ago, I got my wisdom teeth removed. I was hopped up on all kinds of pain medication (some of which resulted in some really great selfies), as well as some kind of antibiotic. During the time that I took the antibiotics, I noticed my psoriasis almost completely disappearing. I really wanted to believe that maybe this bout of fighting was over, but then, after doing some research, I found that antibiotics can either hurt or help psoriasis. In my case, it turned out that it helped, since it calmed the swelling. While scientifically, we're not really sure why antibiotics help psoriasis, I found that it did help a lot. For the week I was taking the antibiotics anyway. Once I was off the medication, it came back. I went back to hemp seed oil treatments and lots of Eucerin and Aquaphor.

Now, a few months later, I'm living in North Carolina, where the winter is cold and the summer is humid. But something else I found here is much, much softer water. Apparently, back home in San Diego, we have some of the hardest water in the country. Here in North Carolina, we have some of the softest water in the country. After about two weeks of being here, I noticed a change in my psoriasis. It was less itchy, less red and swollen. Generally it was a lot calmer. Turns out, a study was done in the UK showed that 91% of subjects who used soft water found their skin to be less itchy. Less itchy = less irritation = less swelling, for the most part.

That brings me to now. My skin is much happier, but my condition is not gone by any means. I recently met a friend in my school who has psoriasis as well, and we have found a bit of a confidence in each other. I'm much more open about my condition now, and it actually really comforts me to be able to educate the people around me on my condition.

I don't by any means want to seem like I'm advertising for myself to seem like I'm this sad pitiful person who has some awful disease and I need help. I am posting my story here to create awareness, and to help others understand how autoimmune disorders can really affect a person's quality of life.

If at all possible, it would mean so much to me if you could donate to my team, and if not, please share this post to spread awareness! 100% of the money donated goes to the National Psoriasis Foundation, and any little bit helps.

I'll end this with one of my favorite poems about psoriasis that I found on Tumblr about a year ago.

I am glad that
there is someone in the world
who doesn’t grimace at
my
dead
skin
on
their
black sheets.
I am reptilian in nature,
forever slithering in
the cracks and crevices
of things long
forgotten
in vain hopes
to find
beauty among
the ruins.
Besides,
the best love is always a little
venomous,
anyways.
- cat-called.tumblr.com